This past November, I  jumped on the LOWBrewCo bandwagon heading for a Drag Show called Drag of the Dead in Fort Frances, Ontario. I had never been to a drag show, and, (not to play into stereotypes too strongly) I figured probably a number of the loyal lovers of LOWBrewCo beer probably hadn’t been to one either… so, I took it as my joyful duty to check it out, learn a thing or two (or five) about drag, and share my experience. Walking into the event with open excitement, the answers to my questions came easily. 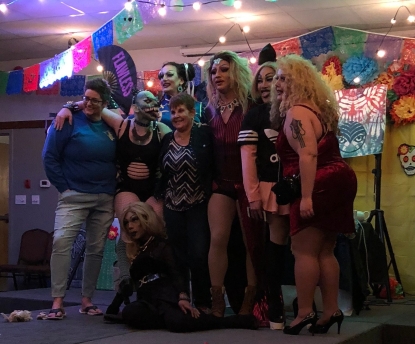 Who goes to a drag show?

Fort Frances is a Canadian border town where you literally look across a river at Minnesota. We arrived early at La Place Rendez-Vous, set up our pouring station in the Day of the Dead themed conference room, and watched the attendees stream in. Turns out, everyone was on board for the show… it was SOLD OUT, even in this small industrial town! I tried to spot a trend in ages, genders, personalities… any little box I could draw. It seemed the curiosity in the show was widespread. One of the performers was actually from Fort Frances, and their Grandma was right in the front row, along with the rest of their family!

How does a Drag show unfold?

In this case, at show time the crowd found their seats, and Prairie Sky stepped out to host and introduce the evening. Prairie Sky is a legendary Drag Queen from Winnipeg, and when she glided out onto the stage, the crowd was instantly engaged in the cheery confidence in her step. She was quick to acknowledge that a number of us had not been to a drag show before, and gave us the lowdown: “This isn’t a talent show ok? If anything it is talentless acting… just think of it like a bad date. You, as the audience, need to fake it until you make it, and we’ll work off your support” So… clearly this is not a competition looking to judge if a Drag Queen is talented or not. Prairie Sky’s intro also answered another of my questions;

What is the expectation of the audience?

It’s simple: the more you let yourself get into it, the more good vibes the performer has to work with. One by one the queens would come out for their feature performance, usually dancing and lip singing to their song of choice. The outfits were incredible, and many of the queens actually did a wardrobe change at halftime to then come out for another dance! Generous tips from the crowd became a playful part of the show as well, so many of us were flocking to the atm at halftime. As Prairie Sky said at one point, (quoting Dolly Parton;) “It costs a fortune to look this cheap”.

What is Taboo at a Drag Show?

When I asked Prairie Sky this question, she was quick with a simple answer; The common women’s rights issues seen time and time again, or experienced by dancers and other types of performers are what drag queens also face on a regular basis. Some people seem to think it is okay for them to grab or touch the queens, and that is simply not cool.  The audience must remember that someone’s body is their own territory to decide the guidelines on. Keeping things light-hearted, Prairie Sky then paused and said “yah, but like pretty much anything else goes!” 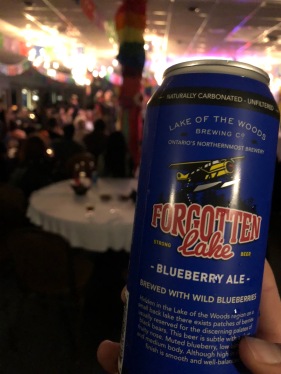 Having now been to my first Drag Show, I am confident it won’t be the last one I attend! It was such a feel-good time, and it should be on everyone’s bucket list to enjoy a drag show.  The light-hearted spirit in the room was contagious, the crowd was electric with hoots, laughter and joy, and LOWBrewCo beer was flowing steady. We’ll make sure to bring the Forgotten Lake Blueberry Ale again to the next drag show we’re at, as that one was plenty popular.

Think Lake of the Woods Brewing Company should host a Drag Show at our Taproom in Kenora? Drop me a line and cast your vote!

1 thought on “Hops and Heels; LOWBrewCo Sponsors a Drag Show”