Soon, Lake of the Woods Brewing Company will be opening a brewery in Winnipeg and joining its Manitoban neighbours. With the number of breweries in Winnipeg jumping from less than 5, to around 15 over the last few years: brewery tours are becoming a useful offshoot of Winnipeg’s growing craft beer presence. Offering services that give customers the behind-the-scenes experience at multiple brewing companies in one go, brewery tours are certainly a service for Lake of the Woods Brewing Company to consider embracing. 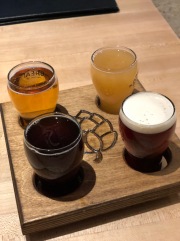 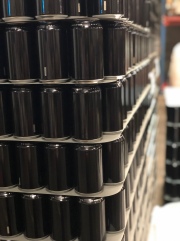 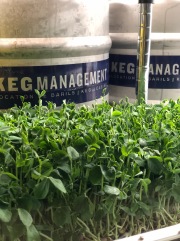 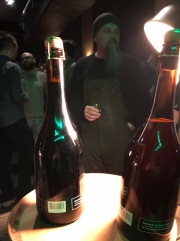 Curious how they currently operate in Winnipeg, I booked into a tour. I wanted to develop my own views on what LOWBrewCo might want to see brought to the table. My trip to Winnipeg wasn’t just about the brewery tour. I also had the great privilege of acting as tour guide to beer guru, Ryan Newhouse, operator of Beer Now and the worlds only Beer Marketing and Tourism Conference

Ryan was in town to do an article on Winnipeg’s Winterlong Strong Beer Festival, and how it celebrates the heartiness that is us prairie folk in the cold centre of Canada. Who better to investigate tours with, than a beer pro who has been on somewhere between 70 and 100 brewery tours! Ryan had a great ability to tune his ears to the take-a-way points at each brewery, and generally had valuable insight into how operations could be better. All that to say, Here are 4 key points I came away with, as potential areas of development for beer tours in Winnipeg.

It is common knowledge that brewing companies brew beer. The process is certainly interesting if you haven’t seen it, but when going to 4 very different breweries in one night, it can be repetitive to be talked through the same basic steps at each stop. It would be great if the breweries knew what the other ones were talking about, and could grow off each others demonstrations. This thought is almost straight out of Ryan’s mouth, but if, for example, location one hyper-focused on hops, suddenly they could go into details like where their hops are from, how they grow on the farm, how they’re harvested, how long they last, brewing with fresh hops versus dry hops, how to taste hops in beer, flavour profiles of different hop varieties, and so on. As you move on to new breweries, you get the expert low down on different aspects of beer making or peculiarities of a given company, letting the experiences grow on each other instead of restarting every time.

On our particular tour, there were about 9 people getting in the tour van together, going from place to place. As the night went on, differences in our agendas became clear. Those who liked the idea of lots of drinks and not having to drive, those who had time to kill in Winnipeg and thought a tour might be good, but had minimal pre-existing interest in beer, and then Ryan and I, absolute beer enthusiasts, ready to drink up any information, stories, and flavours coming our way. There may not be enough tours happening in Winnipeg for this to be viable, but having a simple questionnaire as part of the booking process could help customize tours to the types of folks booking them. It would only make grouping your customers easier if you’d gather info from multiple choice questions such as; How many Brewery Tours have you been on? A)First one B)Less than five C)Lots. This one question alone tells you a good amount about a person’s beer knowledge and potential interest level.

When it comes down to a bunch of strangers getting into a van to spend the evening together, an ice breaker is appreciated. As the host, the tour provider is the only tie everyone in that van has to each other and the tour, as the host is the one contact everyone booked through. They hold the key to conversation… not to say everyone on a beer tour is required to become buddy buddy, but it helps if the host makes it feel possible at least. What you don’t want is to feel like you’re being babysat, as you climb in and out of the van and are guided to the breweries, then told snack time is over. I am not trying to say our host was unkind, as they did a fine job looking out for our needs. However, we may have gotten more out of our time if the host was ready with fun facts about craft beer in Winnipeg, asking challenging questions about what we experienced or liked at the different stops and simply, if they were just sitting with us during the meal to chat, or even during the tastings (though they can’t drink because they’re driving) again, simply to unify the group and provide insight into the experience for curious attendees.

The more you use your hands, and get in there, the more your brain lights up. That’s all. So how can brewery tours make that happen? Well, let’s brainstorm; little games like beer pouring contests – to see who can pour the best head, or guess that beer – where they try to match the aroma to the right beer name and type, or drawing a tasting wheel, and comparing results to the breweries official one. Even simple acts like checking out some yeast on a microscope, or getting a beer glass to take home from the tour help the customer feel involved and have a lasting impression of the experience. 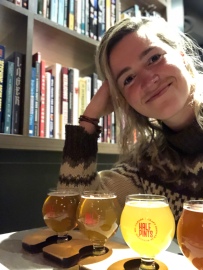 These are, simply my thoughts and reflections, with some wise input from Ryan Newhouse of course. Improvements aside, jumping on a brewery tour bus is certainly a worthwhile way to get a deeper look at the craft breweries in any city, and I do hope that in the near future, we’ll be riding a Winnipeg tour bus to Lake of the Woods Brewing Company!

Have you been on an awesome brew bus tour? I want to hear about it! Shoot me a message below, I’m ready to listen.